Geometallurgy (or "geomet") is an interdisciplinary field of practice between geology and metallurgy that puts in place processes to record—in an accessible format—an understanding of the orebody, how changes in the orebody and operating practice drive productivity and production, and understanding the operating parameters in the mine and mill which can be manipulated to improve productivity and operating costs.

Geomet aims at integrating geology, mining and mineral processing disciplines to develop a spatially-based model that can, amongst other things, predict:

Its application can start as early as the initial design stages and can be a powerful tool that helps ensure the optimum choice of flowsheet and provide inputs to economic models that minimise financial risk.  Once the mine is in operation the geometallurgical model becomes an invaluable production management tool for short and long term planning as well on-going operational optimisation.

From a comminution perspective the associated modelling component needs to translate ore properties such as hardness into a throughput (tph) that the crushing/grinding circuit can sustain and, in-line with concerns over fossil fuel consumption and greenhouse gas emissions, the energy required to do so.The hardness information is normally provided by the block model. This is essentially a 3D map of the orebody which is divided into equal-sized “blocks” each of which has assigned to it a variety of physical properties, depending on the complexity/sophistication of the block model It provides hardness information either directly or indirectly.  In the former case the data originate from laboratory hardness tests on drill core samples that intersect the blocks.In the case of the latter the hardness data are inferred from other properties contained in the blocks, such as mineralogy, chemical assay values, lithology, degree of alteration etc.Sometimes a combination of both is used where direct measurements are augmented by inferred values.

The popularity of geometallurgical  modelling would appear to have coincided with the simultaneous introduction and increasing acceptance of the so-called Mine-to-Mill (M2M) philosophy. M2M was first started by the Julius Kruttschnitt Minerals Research Centre (JKMRC) in the mid 1990’s (McKee, 2013) and at the implementation level is inextricably linked to geometallurgical modelling, albeit that the latter has a potentially larger scope of application. However, as McCaffery (McKee, 2013) suggested:

“Mine to Mill (and geometallurgy) is really just code for making the effort and putting the processes in place to record, in an accessible format, an understanding of the orebody, how changes in the orebody and operating practice drive productivity and production, and understanding the operating parameters in the mine and mill which can be manipulated to improve productivity and operating cost”.

Explicit in this definition is “understanding of the orebody” and its relationship to “productivity and production”. In the context of comminution this means quantifying the responses of the crushing and grinding circuits to changes in ore hardness. For this to be achieved a laboratory ore hardness test must be chosen where it is known that the output(s) from the test closely correlate with observed comminution circuit performance. This is where the SMC Test comes in. It has been repeatedly shown using a large data base of comminution circuits that there is a close correlation between the SMC Test parameters and the performance of the associated comminution machines.  An example of this is clearly shown in Figure 1 where production data from a large copper mine is plotted against the SMC Test parameter, DWi, that the mine’s block model was populated with.  Given that the production rates are not only influenced by hardness but are also a function of feed size, the way the comminution circuit is being run and upstream and downstream disturbances, the correlation is excellent. 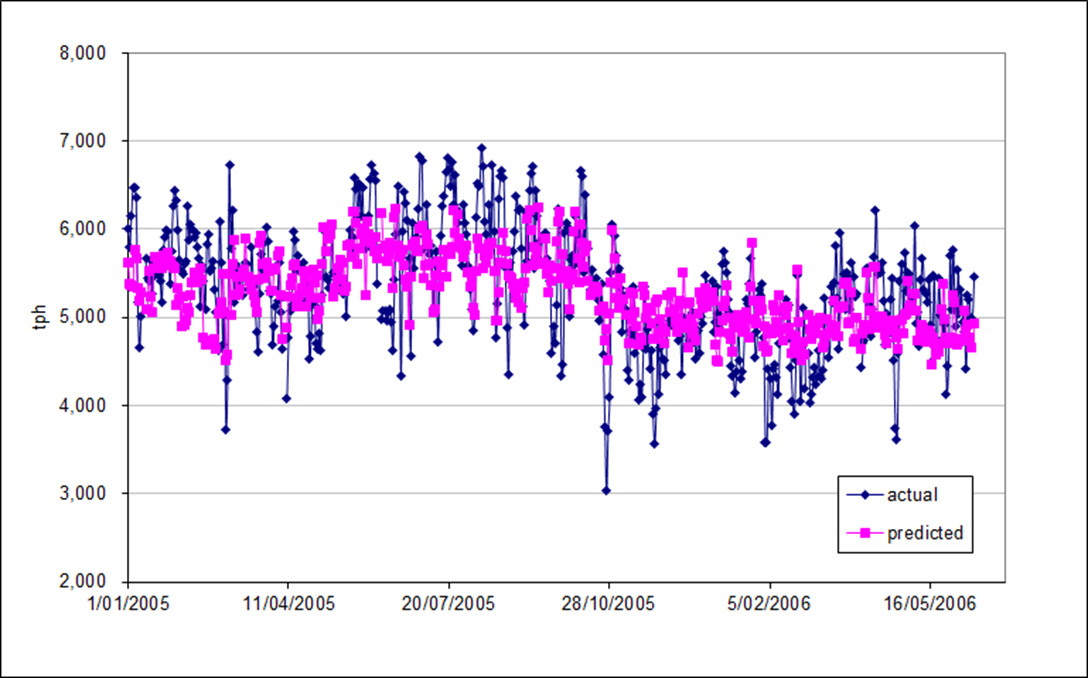