Minera Los Pelambres (MLP) is located in Chile and is the flagship mine of Antofagasta PLC, one of the top ten copper producing companies in the world.  Its forecast production for MLP for 2019 is 360–370k tonnes of payable copper, 9.5–10.5k tonnes of molybdenum and 50–60,000 ounces of gold.  This comprises almost half of Antofagasta’s annual copper production, almost a half of its gold and nearly all of its molybdenum.  MLP has three parallel grinding lines each in SABC configuration with a current combined throughput rate of approximately 175,000 tonnes per day, with confirmed plans in place to increase this to 205,000 tonnes per day by 2023.

In the search for a model with the capability to accurately forecast grinding circuit throughput up to 5 years ahead, the MLP concentrator management team, with the help of consultants Ingenieria y Tecnologia (I&T), carried out an in-depth review of a number of alternative ore characterisation and associated forecasting approaches (Misle et al, 2013).  These included Bond’s work indices in combination with Barratts Millpower 2000 model, SGS’s SPI test and associated CEET 2 simulator, the JK drop-weight test and JKSimMet simulator, plus the SMC Test and Morrell’s associated equations. Following this critical review the MLP/I&T team decided that its best chance for a successful outcome was to use an approach based on an equation developed by Morrell (2004) which relates the SAG mill specific energy to the SMC Test’s DWi ore hardness parameter.  This equation, in its general form, predicts specific energy (kWh/t) as follows:

SAG mill throughput is then predicted by dividing the SAG mill power draw by the specific energy:

The MLP/I&T team adapted the Morrell specific energy equation to local conditions by replacing the  F80 term with the -100mm and -32mm fractions in the feed, which they obtained from on-line image analysis measurements, plus using on-line bearing pressure instead of ball load volume (J).  For the DWi parameter large numbers of SMC Tests were carried out to populate the MLP block model.  This was then used to provide the daily proportions of each of the 4 geomet ore units being sent to the grinding circuits together with their associated DWi values.

To calibrate the model (ie determine the constants/exponents in the specific energy equation), daily production data from each of the 3 grinding lines were used.  These data were extracted from the plant’s archives and filtered to remove periods where one or more main pieces of equipment were out of service, thus retaining only data from periods of “normal” operation. The data were then used to fit the constants/exponents using least squared techniques.

The performance of the resultant model is illustrated in Figure 1 and was shown to be accurate to within a very impressive +/- 3.5% on average on a monthly basis.  The model will be used for operational and planning purposes to improve throughput-related decisions. 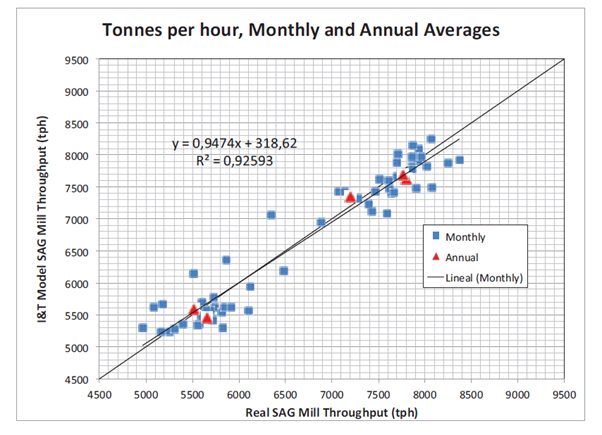